‘Intense’ is certainly an apt word to describe Eugene O’Neill’s most autobiographical play. Set over one long Summer’s day, Long Day’s Journey into Night sees the disintegration of the Tyrone family –made up of three male alcoholics including the failed actor father James Tyrone and a mother who became addicted to morphine after a difficult birth.

After seeing David Suchet in All My Sons, he was the main reason I went to see this play. His James Tyrone exudes the utmost passion for his wife and the charisma of a once-great actor. This huge role certainly shows off his versatility as an actor, especially at moments where he suddenly switches from being inconsiderate to caring. The audience actually gasped when he lunged at Edmund (Tyrone’s youngest son) with ‘If you hadn’t been born, she’d never…’ followed by his swift ashamed retraction.

However, it is Laurie Metcalf’s performance of Mary Tyrone that you will be leaving the theatre talking about. Glazed eyes, slowly dishevelling hair, gentle rocking, and the way she falls into rambling monologues reminiscing on her past complete her subtle performance of a woman who’s given up.

There is a touch of comedy that comes from James Tyrone’s attention to saving money, but it only heightens the ultimate tragedy of the play and what makes it even more painful to watch is that it is based on O’Neill’s real family life. Furthermore, Lez Brotherston’s low-ceilinged set adds to the feeling of entrapment of the characters’ lives and to the entrapment of addiction.
Everything about this production is sublime. Even the way the curtain fell at the end. For a very naturalistic play, one swift and noisy fall of the tabs made for an abrupt and theatrical end. Its impact left the audience aghast, as if they had been cut off from the play.

I met Suchet afterwards and he said that the only role now that he really wants to play is Willy Loman...

Long Day’s Journey into Night toured and then played at London’s Apollo Theatre until 18th August. 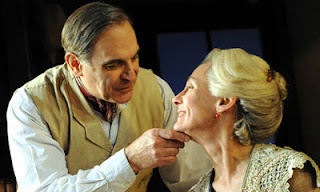 Curve Studio, Leicester.
‘I’m not subtle’ exclaims a desperately lonely Kath to her lodger in Orton’s first major success. The line, I feel, reflects Paul Kerryson’s production well. Reading the programme notes, I realise that Orton intends the play to carry a ‘blatant demonstration of sexual yearning’ that should be obvious to the audience. Indeed, Julia Hills’ excellent performance convincingly depicts Kath’s ambivalences, from complaining of the ‘tarts on the TV’ one moment to undressing and mounting her lodger the next. Similarly, she shrieks one moment from the discovery of her dead father to turning back to comedy the next. However, this seems to be the problem with the production: it concentrates heavily on the comedy whilst keeping any sense of building drama at bay. Andrew Dunn in particular builds in panic and frustration as the controlling older brother of Kath after Sloane has beaten their father, but the dramatic tension is swiftly interrupted by ‘I’ll have to send his pension off’! Unsatisfying as this may be, I did feel that it reflected the people of Saffron Hill Estates where Orton was from. I go through the nearby estate that Orton described as the ‘gutter’ on my way home, and it is stereotypically viewed as a lower class, “rough” area of Leicester, yet perhaps ‘real’ people would concentrate on what to do with a dead person’s pension in a moment of grief rather than pronouncing some beautifully poetic monologue as some plays may depict. Furthermore, it is intended for farce to be a strong overtone.
The performances are all wonderful. Alex Felton portrays Sloane as a sexually liberated, slightly enigmatic man and Julia Hills (who I fondly remember from 2Point4 Children) is brilliant, switching from being motherly to sexually suggestive whilst still delivering a performance of clarity which sometimes shows up Felton’s slight struggle with diction and projection at times.
Something that is getting a bit annoying with Paul Kerryson’s productions is how he really likes to hammer home the context and setting of the piece. As much as I enjoyed the 60’s video and photo montage at the start of each act, I felt it was perhaps a bit too obvious a statement. He did a similar thing with the American advertising billboards in Gypsy and the photo of Margaret Thatcher in Absurd Person Singular – maybe it’s his signature piece. I wonder what he’s got planned for Piaf next year… my guess is a photo of Edith Piaf being projected.
Overall, the actors achieve the hypocrisy and pretensions of the middle classes that Orton writes so well. It’s played on a simple yet effective set with a lighting design which nicely reflects the changing moods in the dialogue as well as the questions raised at the play’s end. Not only was Mr. Sloane entertained, but the audience were as well.
Entertaining Mr. Sloane runs until November 24th.