The Phantom of the Opera

‘Hide your face so the world will never find you’

And now for something completely different… Following the intimate storytelling of Rob Ward’s one man play, The MP, Aunty Mandy and Me the previous night, we returned to Curve for a show that is much grander in scale; the new touring production of Andrew Lloyd Webber’s The Phantom of the Opera. The stark contrast between these two equally enjoyable shows reminds me just why I love the theatre so much – the infinite variety, the imaginative scope, the escapism, the immersiveness, the grandeur, the visual and thematic audacity. And it all happens live, right before your eyes. Magic is real, ladies and gentlemen, and it occurs on stages up and down the country every night. There is nothing on Earth quite like it.

It seems very apt then that, as I exult in the glories of the theatre, the piece that has sparked this adulation is itself a love-letter to the arts. Say what you want about Lloyd Webber’s hokeyness, his habit of recycling old melodies, or his financial dominance in musical-land – he knows how to put on a damn fine show! And with Phantom being perhaps the most personal of his oeuvre, his passion for music and the arts comes across in the sheer ambition of the piece, and the hard work and talent of everyone involved.

The story of a social outcast murderously infatuated with a young, talented ingénue is well documented, so I needn’t go into the specifics of the plot. As a fan of Gothic literature I’m willing to brush aside the problematic aspects of the story - aka ‘Stockholm Syndrome: The Musical’ - as it’s a pretty perfect example of the genre and all of its underlying social, sexual and psychologically meaty themes. And because of this generic complexity, combined with Lloyd Webber’s sensuous music (‘Music of the Night’ and ‘The Point of No Return’ are sexy songs!) and magnetic performances from the leads, the audience readily accepts the Phantom, a cold blooded serial killer, as a romantic/Romantic figure. Lloyd Webber and lyricists Charles Hart and Richard Stilgoe struck gold with their ability to call upon our innate desires and repulsions, and our fascination with the grotesque, the beautiful and the wielding of power in all shapes and forms. Upon this foundation a musical sensation was built, sustained and continues to tower over its peers.

Of course, much of the success lies in the hands of the cast. Christine must be more than a simpering waif, the Phantom must compel our sympathy, and the two must have a convincing chemistry to get us fully on board with the melodramatics of the plot. Gladly, the show is in safe hands with Holly-Anne Hull and Killian Donnelly at the helm. In a demanding role, Hull confidently holds the piece together, making Lloyd Webber’s notoriously difficult soprano solos seem effortless and rich. Donnelly continues to cement his reputation as the leading man in musical theatre with a performance that traverses the full spectrum of human emotion, while also bringing a physicality and tactile edge to the role that I haven’t noticed previously. Adam Linstead, Matt Harrop and Saori Oda provide comic relief as the flustered Opera House owners, Andre and Firman, and the stroppy prima donna, Carlotta. Importantly, the exceptional company bring to life all the hectic bustle of 19th Century backstage society. As a theatre nerd I love peeking beyond the wings into the not-so-glamourous side of showbusiness.

I saw the London production as a teen around a decade ago, and while the music and mood have always stayed with me, I’d quite forgotten how visually impressive Phantom is. Cameron Mackintosh and The Really Useful Group have pulled out all the stops for this tour, from the multitudes of lavish scenery – exquisitely reproduced by Matt Kinley from Maria Bjornson’s original designs - the lustrous costumes and all the whizz-bang tricks we expect of a supernatural thriller-cum-Mega Musical. No one can complain that you don’t get your money’s worth!

From the moment the orchestra struck up those famous chords in the overture (on a personal note, can I say how much I love all those 80’s power chords, haha!)  I was spellbound and I’m so pleased that the show still lives up to its spine-tingling renown. The production is brimming with enchanting set-pieces, such as the iconic chandelier crash, the eerily beautiful candle-lit boat ride to the Phantom’s cavernous lair, and the epic carnival of ‘Masquerade’. My fiancé (and co-blogger) hadn’t seen Phantom before (nope, not even the flaccid 2004 film adaptation), and as a self-confessed sceptic, it’s safe to say he was completely won over by the show in every aspect.

The production is spectacular in the truest sense, and even the most curmudgeonly of spectators will find something to enthuse over. If I could, I would buy a ticket and see the show again this evening (and the next, and the one after that, and… you get the picture!), and that is the surest sign of a great production. While in some spheres it may be unfashionable to like Lloyd Webber, and many will agree that his recent work has produced more misses than hits, it’s fair to say that the ALW classics still hold the power to beguile audiences worldwide, and his reputation as one of the great composers is fully deserved. Bravo!

The Phantom of the Opera plays at Curve, Leicester until 21st March and continues on tour.
For details of further venues please visit: https://uktour.thephantomoftheopera.com/ 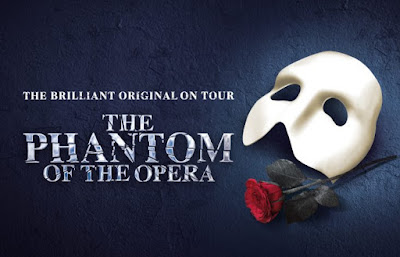 Posted by Not Exactly Billington at 05:24